Solar fraction of Camaiore which is located behind a buttress of Mount Prana. In the territory of this country is the cave of Buca del Tasso, known for having returned a femur of a Neanderthal child dating back to about 40,000 years ago.

Not far going up to Monte Penna and continuing into the hollow of Schizzolino meets the Cave of Tambugione, neolithic burial, Di Metato you have a document of the tenth century, but only with reference to the location whose name is derived from the characteristic Dryer for chestnuts.
The first traces of a settlement can be traced back to the fourteenth century, ie, after the abandonment of nearby villages and fortified Montecastrese of Monte Penna.

The village church was built along with the bell tower in the eighteenth century, just before it meets the old kiosk of the seventeenth century to the will of the family of Peter Benassi.
Metato was always one of vicinie the City and Vicar of Camaiore. Metato above, to the north, lie below the summit of Monte Penna ruins (remains of houses and the wall) of the fortified village around the XII century.

To achieve Napiaia, once you get to Metato leave the car at the parking lot. The house is about 400m from the car park on foot.
Follow the directions of the signs Napiaia.
Wear comfortable shoes! 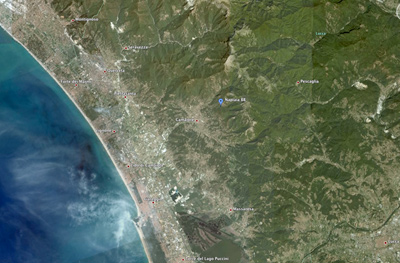